In a quiet neighborhood, much like your own, a basketball bounces against the pavement, and music drifts down the hall from a teenager’s bedroom. The phone rings. A woman answers and hears that a two-month-old baby is in need of a home. Can she and her family take in this infant?

If you are a foster parent like Britt, your heart leaps, and the answer is going to be “Yes.”

In 2005, Sonoma County Families and Children’s Services fielded 11,924 phone calls regarding child welfare, and by August nearly 600 children, from infants to teens, were removed from a possibly dangerous or abusive situation and put in a foster home, group home or kinship (relative care) home.

Britt and her husband Cleve became foster parents in 1990. They couldn’t have children of their own, so they looked into the process of becoming a foster family, hoping to adopt a foster child. They adopted two foster children, but the need of children at risk spoke to their hearts and they continued to open their home and hearts to children of Sonoma County.

“Our first foster placement didn’t work out to adopt,” Britt remembers, “and it was devastating when she went home. But our second placement was meant to be. We got her when she was 18 months old, and she is sixteen years old now.”

Their son, who is now twelve, was placed with them at age two and a half months. The process took over two years before they could finally adopt him, and it was touch and go at times.

Britt and Cleve are very open about their children’s backgrounds and their subsequent adoptions. Her daughter has met her birth mother, and her son’s birth mother sends money on Christmas and his birthday. Britt sends photos to keep the connection open, but she is also careful about protecting her family and the foster children who stay with them, which is why we have not identified this family by city or last names.

Children who enter this home are met with love from all four members of the family. Four sets of arms are available to cuddle and caress, feed and play, tickle and dress. Four smiling faces greet a little one’s eyes, and four soothing voices speak soft words of encouragement. They work together to provide a stable, loving environment for as long as the child remains in their care.

“When we have a child placed with us, it is usually long term,” Britt said. “We have done satellite care, but we usually do the longer placements of seven, eight, nine months or a year and a half.”

Satellite care is a term for emergency shelter homes, where a child is temporarily placed when the birth family is going through the court system and social services system’s evaluations.

Typically, a child’s stay at a satellite care home is up to three months, versus the longer-term homes, where a child stays until they are reinstated to their families, adopted, or become of legal age to be emancipated.

“We take only one child at a time, because I have my children to consider, too,” Britt said, a note of apology creeping into her voice. But in eighteen years Britt and her husband Cleve had cared for thirty-one children, one child at a time.

To Britt and Cleve, the foster care system is not a cold, distant mechanism, but a living, breathing, caring unit striving to do the best thing for local children. Parents who have their children removed to foster care may need to complete anger management courses, counseling or drug treatment before they can have supervised visits with their children.

“I like to help the birth parents,” Britt says. “Most of them haven’t had a good childhood themselves and they just need to learn what it means to be a good parent.”

Like other foster families, Britt and Cleve attend special training meetings to become foster parents, and they still attend a support group class once a month, which they say provides a wonderful support system.

Britt says being a foster parent is rewarding, but she admits it can be tough, too. A child may come from a home where they were abused, or exposed to drugs, and they may have difficult behaviors. There is an emotional attachment that occurs, she says, because the men and women who volunteer to be foster parents are loving and giving by nature.

For Britt and Cleve, caring for children is not just a job; it’s a calling.

There is always need for more homes for children. The Children’s Village in Santa Rosa opened in August 2006, building a small community of foster families hoping to meet a very real need to keep siblings together and create a foster care community. Foster care families strive to bring stability and love to the children in their care, and Britt and Cleve are no exception.

“Every time a child goes on, I tell my husband, I don’t know if I can do this again… but then, after a few days off, I start to feel like something is missing, and when they call and tell me a baby is in need, can I take it, I always am ready to do it again,” Britt said.

In the background a baby gurgled, and Britt laughed. “Really, how could I say no?” she asked, and then answered herself: “I can’t.” 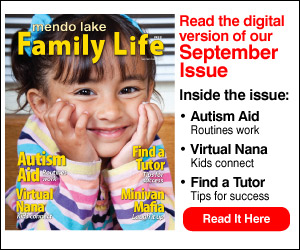